Paul Cartledge argues that all historiography can be seen as fictionalised and relishes the fact that novelists breathe new life into ancient worlds. 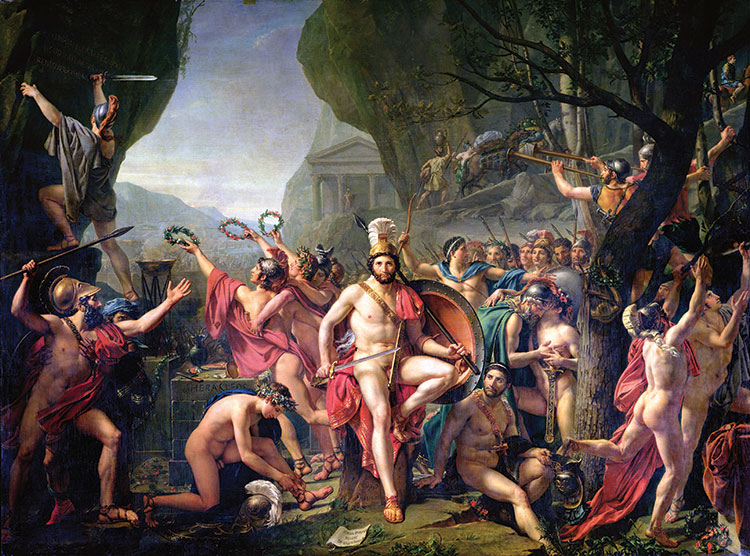 Jacques-Louis David Leonidas at Thermopylae, 480 BC (1814), Louvre, Paris.Probably most historians fall into one of two camps on the sensitive issue of historical fiction (see Jerome de Groot, March 2015). There are those who hate it, precisely because it is fiction and so exempted from a fair number of articles of the historian's binding code of practice, such as objectivity, avoidance of anachronism, fidelity to source materials and an overriding concern with explanation. On the opposite side are those who welcome or even embrace it, for the sake of the insights that a novelist, unfettered by professional historiographical protocols, may bring in the way of empathetic understanding, 'feel' and contemporary colour. Then, of course, there are those historians who like to have a foot in both camps in their own historiography, passing off unwarranted speculations as dead certainties (no names, no pack drill).

I belong unhesitatingly to the second camp. This is partly because I recognise that all historiography is to some degree fictionalised: it is we historians who make history, after all, out of what we are prepared to count as certain facts of a significant past. But it is mainly because, lacking the necessary imagination myself, I relish the efforts of novelists, some of whom are also historians, who attempt to breathe new life into the ancient worlds of the Greeks and Romans: Edward Bulwer Lytton, Robert Graves, Rosemary Sutcliff, Peter Green, William Golding, Harry Sidebottom – there is a long and noble tradition of such writing. Perhaps my favourite remains, after 50 years, Mary Renault: I first read her Last of the Wine (1956) as an early 1960s schoolboy and fairly recently re-read it as a professional ancient historian of 40 years' standing. It still stacks up remarkably well as a sympathetic recreation of Greek and Athenian culture and society, not least in its homoeroticism.

In this brief contribution, though, it is ancient Sparta that I want to take centre stage. The modernist, feminist pioneer was Naomi Mitchison: her Black Sparta novella (1928) anticipated her full-blown novel The Corn King and the Spring Queen (1933 and again republished 40 years later by Virago). Over the last decade or two there has flowed a further steady stream of Sparta-based novels. This includes the graphic novel series of the 1990s by Frank Miller, which became the basis of the digitally-enhanced movie franchise 300 (not bad) and 300: Rise of an Empire (execrable). But, as literature, Steven Pressfield's Gates of Fire (1998), a novel of the Battle of Thermopylae (480 BC), knocks that into a cocked hat. The list of US vets going back as far as the Korean War who have paid tribute to its authenticity – not necessarily the same as historicity – is staggering for its warmth and length.

Most Sparta-based novels are indeed set in wartime, hardly surprisingly. Two that focus, like Last of the Wine, on the Athens-Sparta Peloponnesian War (431-404 BC) are Jon Edward Martin's Shades of Artemis (2004) and Nick Nicastro's The Isle of Stone (2005). Martin's is helpfully subtitled A Novel of Ancient Greece and the Spartan Brasidas. Brasidas died at Amphipolis in 422 and certainly deserves his fictional exhumation, given the tantalising hints dropped by Thucydides and Plutarch; but Martin's style is a bit clunky and, though he credits help from a professional ancient historian with an expert knowledge of the subject, he makes too many factual errors, not least in the spelling of ancient names, to inspire total confidence.

Far more reliable and in conception more stimulating is Nicastro's Novel of Ancient Sparta, which focuses on one of the most fascinating of all episodes in that prolonged and devastating conflict. The isle in question is Sphacteria, lying off the south-west coast of Messenia in the Peloponnese, where a small Spartan detachment got itself trapped in 425 and the survivors, in flagrant contravention of the strict Spartan code, or at any rate myth, decided to surrender to the Athenians rather than die to almost the last man, like their famous '300' ancestors at Thermopylae. The scenario offers the author plenty of scope for exploring, in the manner of Mitchison before him, the educational, marital and male-bonding practices of this peculiar (as the ancients themselves saw it) society.

By contrast, Spartan by Valerio Massimo Manfredi (English translation 2003, Italian original 1988) is set, like Pressfield's Gates of Fire, in the Persian Wars era of Thermopylae and other great anti-Persian battles (Salamis, Plataea …) at the beginning of the fifth century. The generic brother versus brother plot-type is of course itself ancient (think Sophocles' Antigone), but Manfredi thickens it by making one brother a noble Spartiate, the other brought up believing he was of Helot (servile underclass) birth and becoming by conviction a Helot liberationist. Never mind that the way the plot is spun is factually, historically impossible, not just implausible: this is gripping narrative fare.

My final example, the novel that has most immediately prompted this survey, is set in the same era but makes no such basic historical error. Like Mitchison, Tariq Chaudhry has chosen to focus his A Queen of Sparta (2014) on the distaff side of ancient Spartan life and politics. The queen in question is Gorgo, daughter of King Cleomenes I, wife of his half-brother Leonidas and one of the undoubted stars of 300 (the film). Gorgo (her name means 'gorgon') had a mind of her own, had something to say and was not afraid to say it – in public, to men. That much is apparent from the couple of delicious mentions of her in the pioneering Histories of Herodotus (no stranger to fiction, he).

The ancients themselves were very exercised by Spartan women. Most of the other Greeks, such as Aristotle – but unlike Herodotus – abhorred their allegedly undisciplined sexual license and materialistic, luxury-loving ways. The truth is, of course, unrecoverable, but Chaudhry has no need to fret about that and gives the fictional Gorgo his best shot, in an ambitious tale of murder and mayhem, which stretches from Greece to the Swat Valley (in the author's native Pakistan) and from the early fifth century BC to the late fourth. Go, tell …

Paul Cartledge is A.G. Leventis Professor of Greek Culture emeritus at the University of Cambridge.